MY CHRISTMAS GIFT FOR GRETA

Greta,
You don’t know me, but we share something in common that is very special. That something is enormous and powerful and beautiful and elemental. That something is Mother Ocean.
I too have spent long periods of time at sea. My longest ocean passage was 30 days, sailing my little 30 foot boat from Hawaii to San Francisco. In my case, I was also doing this alone.
So you have experienced something of extraordinary magnificence. You have glided – or on difficult days - pounded – across the Wide Waters. Very few people have ever done this. To be hundreds of miles from the nearest humans, in the gigantic vastness of the Sea, can teach a person just how tiny we are compared to the mighty eco-systems of our watery planet. And looking up at the immense dome of stars, with the clarity of deep-ocean darkness, reinforces that lesson in humility even more.


This stark difference between the so-called Real World and weeks spent on the rolling waves, always inspires me to examine Life more deeply and independently. Being separated from normal, everyday living, allows one to question the accepted and conventional worldviews.
And so I wonder if sometimes when you were alone on a night watch, did you ever try to step away from the whirlwind that has been your recent life, and examine whether those who have guided your meteoric rise have been truly honest with you - and helpful to you. Did you ever question whether your advisers were as benevolent and noble as they claimed? Did you ever fear that perhaps you were being controlled like a human marionette?
The reason I do not feel guilty asking such questions, is because I too was once a fervent believer in human-driven Climate Change. But the further that I advance into the Autumn of my Life, the more I embrace The Need for Truth. And to achieve that, I find it wise to question everything.
So I took a deep and close look at the supposedly “settled science.” Amazingly, I discovered that the “97% consensus” was just statistical trickery, and that there are many scientists who question the accepted truths of NOAA and the IPCC and NASA, etc. And they do this despite enormous efforts to silence their voices, and to heap scorn upon them for questioning the prevailing dogma.
Therefore, because I believe that your concern and alarm for our planetary future is sincere and well-intended, I offer you a Christmas gift. My present for you is Scientific Optimism.
There are many, many researchers who demonstrate with considerable evidence that Planet Earth has gone through cataclysmic events far worse than the ones we fear today. These previous catastrophes were not caused by human activities. Mother Earth weathered those crises, and emerged as the only lush and life-rich planet among those zillions of stars that you saw so clearly when you were out on the Atlantic Ocean.
Greta, in order to demonstrate that there truly is justification for Scientific Optimism, I will briefly discuss two of the most frequently discussed phenomena which supposedly prove that Climate Change poses an existential threat to life on Earth. And I will show you evidence that you have probably never been exposed to, that, hopefully, will diminish your grave concerns.
The two that I have selected are the Melting Arctic and the Disappearing Polar Bears. These two were chosen because I have direct experience in these areas.
THE ICE-FREE ARCTIC

In 2017, some dear friends offered me the wonderful opportunity to attempt a sailboat voyage across the fabled Northwest Passage through the Arctic from the Atlantic to the Pacific. Because of my love of adventure and of dangerous, faraway places, I accepted immediately.
Our fiberglass sailboat spent months in the Arctic attempting to make it across. I can assure you that it was not ice-free. Far from it, we struggled through frightening conditions in which we had to ponder turning back.
Here is a photo that is typical of the seemingly impenetrable ice that we had to find a path through. 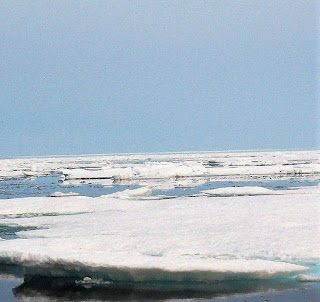 But we persevered and made it. We were the 256th boat to make it through in the 111 years since the first successful passage. Prior to that superb human achievement, there were hundreds of years of failures and hundreds of lives lost.
Before embarking on this quest, I did considerable research. Some people argued that this undertaking was no longer praiseworthy, since the ice in the far north had supposedly melted. But when I carefully investigated this, I discovered a lot of fiction where there should have been facts. Yes, there had been many authorities predicting that the Arctic Ice Cap would soon melt, but inconveniently, it had refused to do so.
NASA claimed it would be gone in 2012. The Naval Research Lab guessed 2013. Al Gore placed his bet on 2014. And James Hansen hedged his wager by suggesting sometime between 2013 and 2018. They were all wrong! But the mainstream media never mentions these failures. Yet, they will undoubtedly trumpet the next ice-free prediction, which will probably be as incorrect as all of the previous guesses.
Here is another deliberate deception about the Arctic that has been foisted on the world. In order to “prove” that the Arctic is rapidly disappearing, the Climate Change defenders picked 1978 as the start date for their tracking of Arctic ice extent.
Since there has been data on the amount of ice for about 100 years, it seems odd that they would select that particular year. It seems a whole lot less odd when you learn that 1978 had the highest ice total in about 100 years. Therefore, by starting at that point the data will be distorted in favor of a rapid decline in Arctic ice. In other words, there has been a campaign of deliberate deceit.

The “Death of the Polar Bears” is a fraud on so many levels, that it is difficult to know where to begin.
They are portrayed as cold weather versions of Panda bears. Pandas are large and slow and adorable. They are also vegetarian and mostly eat bamboo.
Polar bears eat meat and they are one of the most ruthless alpha predators on the planet. They are most definitely not cute and cuddly. They can attack from land or sea and they are strong and fast in both elements. We never went ashore without a loaded high-power rifle. To a polar bear, we were not ecologists there to protect them, we were meat.
So let’s take a truthful look at how these powerful carnivores are doing. In about 1960 there were only about 6,000 Polar bears left in the Arctic Basin. But they were not in decline because of Climate Change, their numbers were dropping because they were being hunted to extinction.
Rich trophy hunters could fly to remote locations and hire a guide to help them shoot one of these magnificent creatures. They would then end up as rug or a snarling head on a wall. This was clearly despicable and needed to end.
Fortunately, in 1973, all of the nations in that part of the world signed a treaty banning that horrific practice. So today, the leading experts estimate that the population has now reached about 25,000 Polar bears.
The main reason that they still remain on the Endangered Species list of some countries, is not scientific; it is political - they are the poster child for Climate Change.
Here is a photo that I took in the Northwest Passage of a mom and her cub. 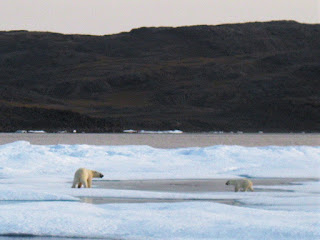 They are magnificent creatures – at a distance. I am delighted that they are not declining – they are flourishing.

Hopefully, this fresh perspective on the issues of the Melting Arctic and the Disappearing Polar Bears, will convince you to seek out evidence that has been hidden from you. Surely, you might wonder why your friends and advisers would lie to you. I believe that there are two main reasons.
1) The true goal of the Climate Change juggernaut is NOT to save the planet. It is to restructure society and re-distribute global wealth.
This quote from Christiana Figures, a recent U.N. Climate Chief, clearly states the actual agenda:
“It must be understood that what is occurring here in the whole climate change process is the complete transformation of the economic structure of the world.”
And Ottmar Edenhoffer, who was the lead author on the IPCC Fourth Assessment, echoes Christiana’s position with this statement:
“One must say clearly that we redistribute de facto the world’s wealth by climate policy. One has to free oneself from the illusion that international climate policy is environmental policy. This has almost nothing to do with environmental policy anymore.”
Furthermore, AOC’s Green New Deal is also not primarily about the environment. Here is a recent quote from her Chief of Staff, Saikat Chakrabarti:
“The interesting thing about the Green New Deal, is it wasn’t originally a climate thing at all. Do you guys think of it as a climate thing? Because we really think of it as a how-do-you-change-the-entire-economy-thing.”
2) The second reason that so many people have been deceiving you, Greta, is because the rewards of supporting the Climate Change orthodox position are enormous. On the other hand, when you oppose that agenda, you are burned at the cyber-stake.
All of the perks flow in one direction. Those who buy into the “impending doom scenario” get published in prestigious journals, appear on television, get invited to conferences, receive research grant money, etc.
But those who question the supposed settled science, are cast out of polite society and scorned as vile “deniers.” Is it any wonder that your advisers have steered you in the direction that they have?

A GLIMMER OF HOPE

Greta, it is likely that you will never see this letter. And even if you do, I suspect that it will have very little influence upon you. But if I could make only one, small, heartfelt request of you, it would be this.
There are now millions of youngsters all around the world who are severely traumatized with fears for their future. Please toss them a little bouquet of Hope.
Perhaps suggest that our wonderful planet is enormously complex, and we certainly do not totally understand how her many systems of land, water, and atmosphere behave. And therefore, we can conclude that maybe … just maybe … the situation is not nearly as dire as we have been told.
Merry Christmas, young lady, from an old sea gypsy. 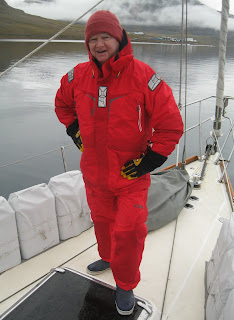 PLEASE SHARE THIS WIDELY, IF YOU FIND MERIT IN IT.