FINDING JOY IN THE ABYSS 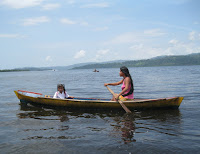 Why do I linger here in the Archipelago of Bliss?
After all, my stalwart little ship could carry me away to any of the exotic lands that have whispered to wanderers down the centuries.  We could drop anchor amidst the palm-fringed isles of the South Pacific.  We could explore the mist- shrouded coast of Japan.  Or we could visit Easter Island - with its gigantic stone heads that endlessly stare at the Wide Waters.
And yet I remain entranced by this little dollop of islands in the Undiscovered Caribbean.  Recently, I finally realized why I am so enchanted by this place.  It is because this is a Land beyond Time.
This revelation arrived in a sweet and poignant manner.  I was starting to raise my anchor when I noticed a commotion on the nearby shore.  A small group of men were dragging a log from the jungle down to the tiny beach.  The Indio children were laughing and leaping in spasms of delight.  That’s because they knew that their dad would soon transform this tree trunk into a … cayuco.

Read more »
Posted by Ray Jason at 9:20 AM Links to this post

A CRY FOR SANITY

Jihadists of the world awaken from your putrid trance!!!  You have been mesmerized by a filthy madness.  Here is the essence of that lunacy, since you apparently do not see it.
You are turning innocent, bright-eyed little girls into flattened, oozing pulp because of an un-provable belief.  You are randomly butchering living, caring human beings because you see them as infidels.  You are smearing the walls of airports and bus stations with the intestines of grandmothers because you believe that your god is better than their god.
You are committing these atrocities FOR WHAT?  The innocents that you massacre did you no harm and did not even know you.  WAKE UP!!!  Behold what you are actually doing.  You are slaughtering these breathing, dreaming, amazing human beings because of what - because of ideas, verses in a book, dogma, and taunts from a pulpit.  These are all ABSTRACTIONS!  These are NON-LIFE, and you are exterminating REAL LIFE because of them.  Such blind conduct is both obscene and absurd.  How would you like me to enter your home and gun down your children in the name of Geometry?
Let me address some of your abstractions.  Your supposed god, Allah, has been a scourge on humanity for nearly as long as the other two main “sky-god” religions.  And yet in the thousands of years of their supposed existence, there has been no clear and decisive manifestation of any of these gods to the people of Earth.  If they are so all powerful, why have they not made an appearance to silence the millions of non-believers who have doubted them down through the centuries?  We only learn of them through the rantings of reality-challenged males who supposedly can part the seas and resurrect themselves from death and ascend into the sky on a winged horse.
And yet, to serve your invisible god in the sky, you would let your truck of death disembowel an innocent little girl.  You will never witness her as she clings to her little doll and tries to understand the instant, unbearable pain that overwhelms her like a bright white blackness.  And what kind of future has your viciousness and your Allah bequeathed her parents whose lives are now forever darkened with a despair that can never be healed?
Here is another one of your abstractions that manifests itself in the most horrific manner - Jihad or Holy War.  Can you not see the sickness at the very core of any concept that must be spread by the sword?  Would you choose anything that has to be forced upon you?  And yet you see no madness in imposing your religion with the pin of a grenade.  Perhaps you even rejoice at the sight of a terrified grandmother soiling herself as you detonate every living being near you.
And what type of Holy Warrior attacks unprotected civilians - the type who is actually an Unholy Coward.  This type is also a tactical idiot.  Who could possibly perceive such despicable acts of terror as a means of winning the hearts and minds of potential supporters?  But when one has been hypnotized by another un-provable abstraction – the one which claims that martyrs to the cause of jihad will be serviced by dozens of virgins after they immolate the infidels – then one’s judgment is demented.
Certainly, I will not deny that some of your jihadist rage stems from blowback to the hideous suffering that the West has imposed upon you with its bombs and drones and soldiers.  But the ordinary, little people of Europe and North America did not initiate that nor did they support that.  And so when you target them for your crusade of carnage, you are only intensifying the absurdity of your assertion that Islam is the Religion of Peace.
Try proving that to the families whose loved ones were just splattered mercilessly on a sidewalk and street in Southern France.

Posted by Ray Jason at 10:37 AM Links to this post 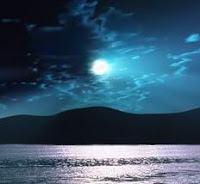 Something startled me from sleep.  Because solo sailors need to be extremely alert in order to avoid catastrophes, my finely-tuned emergency reflexes immediately kicked in.  I lay on my bunk in the darkness listening for unusual sounds and monitoring abnormal movement.  But I detected neither.  Suddenly, I realized what had unsettled me, and I laughed quietly.  I had been awoken by the intense stillness and silence.  In a modern world drowning in frenzy and noise, such profound peace and quiet was … disquieting.
Since I live so immersed in Nature, I knew what phase the moon was in, and so I went up on deck to watch its descent behind the jungled mountains.  The little bay was so tranquil that there was not a ripple in the water.  It had transformed itself into a moon mirror.  No fish splashed and no night bird sang out an alert.  This was primordial serenity.
Recognizing that the moonset was probably about 90 minutes away, I headed below and made some tea.  Then I went topside again with my cup and my clipboard with its little reading light.  This was a philosopher’s dream scenario – Solitude, Stillness and Silence.
Read more »
Posted by Ray Jason at 11:32 AM Links to this post