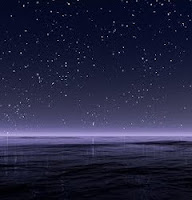 The eye surgeon offered me a choice. She said that after the cataract was removed an artificial lens is inserted. She then gave me two options. Would I prefer to be far-sighted or near-sighted? I instantly chose the long view.
After leaving the V.A. hospital, it dawned on me that this selection applied to much more than my human vision. Had I chosen the “near” lens, I would have been able to see my GPS more clearly as I continue to wander the Wide Waters in my lovely sailing boat.
But with the lens that allowed me to see farther into the distance, I could more accurately pick out the stars that steer me when I do celestial navigation with my trusty sextant. The symbolism of this did not escape me. For I am a believer in the under-appreciated merits of “The Old Ways.”
When I first crossed oceans by myself, there was no Global Positioning System. And there could again come a time when there is no GPS. But those stars are eternal. They have guided mariners for a half a dozen centuries.

Pondering the practical benefits of my improved eyesight, led me to consider the philosophical implications of The Long View. My belief is that pundits deal in the flux and frenzy of daily political and economic headlines. But philosophers strive to see things through a wider, deeper, longer field of vision. Amidst the wrack and fury of the modern maelstrom, we try to focus in on those events and implications that are enduring and elemental?
Normally, I can gain that sharper perspective because living in The Banana Latitudes allows me to divorce myself from the buzz-saw ferocity of mainstream media. But in the waiting rooms of the V.A. hospital, it was inescapable. Particularly, this week with the Kavanaugh hearings on every TV.
My favorite overheard comment came from a black Vietnam Vet who described it as a Circus of the Noose. When his friend asked what that meant, he replied that he felt it was half circus and half public lynching. His old buddy, who might have shared a rice paddy with him, laughed robustly. I could sense that there had been many times in the past when they had laughed together and perhaps cried together.
To escape this barrage of accusation, I had brought along a little iPod Shuffle filled with classical music. I found myself frequently listening to Max Richter’s beautiful modern piece entitled “On the Nature of Daylight.” It has a deeply melancholic feel that is almost like a requiem. This seemed so appropriate as the noble vision and ideal that had been AMERICA, seems to vaporize before our eyes.
*******

I thought back to my own youthful ideals and aspirations. I had been touched by the JFK message of service, of helpfulness, of enhancing human flourishing. I sought a life path that could make the world a slightly better place and that could give meaning to my days here.
And I was settled into a trajectory aimed towards leadership. I thrived in high school and did so well in college that I competed for a Rhodes Scholarship. (In retrospect, I am amused by my naivete, since I had no idea that this was a grooming pipeline for the type of politician that I abhor. I just thought it was the most prestigious fellowship in the world. No wonder I didn’t win.)
Then my idealism was suddenly shattered. My heroes were gunned down. And these assassinations were all done in public view. It was as if Those in the Shadows didn’t just want blood, they wanted to horrify and traumatize the entire nation. Their message seemed to be that “we are so powerful that we don’t need to do this in some dark alley, we can rub your faces in it.”
Shortly afterwards, any desire to assist human betterment through politics, was delivered a fatal blow. I was drafted and ended up in Vietnam on an ammunition ship. Surely, my service was far less dangerous and soul destroying than what the men on the ground experienced, but being even peripherally involved in the needless deaths of innocent men, women and children, cut deeply into my psyche.
*******

And now, as I visit my former homeland on the cusp of having fresh eyes, I can still see clearly enough with these well-worn eyes to recognize that the wonderful nation that I once wanted to serve has deteriorated in so many ways.

And now, as I look forward to having miraculously better vision in a few days, I am also cautious about whether seeing the world more clearly will just be too overwhelming. But then I realize that my gloriously improved eyesight will allow me to see my ocean world far better. Thus, I will be able to appreciate more deeply the beauty and majesty of my animal friends who live in the Sea and the Sky.