THE IMPORTANCE OF UNLEARNING 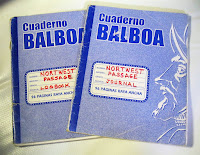 There is a frigid clarity in the Far North. The question was - would it benefit me or bedevil me? Along with the bone-numbing cold and the unimaginable desolation, would there also be insights awaiting me in the barren ice?
I hoped so, and that is why I took two blank journals with me. One would record the daily ordeal of pushing a 42-foot fiberglass sailboat through the 5,000 miles of The Northwest Passage. The other would help me navigate the Inner Voyage.
Throughout my essays I have often spoken of the philosopher’s need for solitude. Without such isolation, it is difficult to distance oneself from the mundane and focus on the meaningful. But on this expedition there would be a paradoxical irony for me in this regard. On the one hand, I would be in a vast geographical area that was almost completely uninhabited. But I would also be in a small sailing boat along with four other people. And this situation was quite difficult when one “needed a little space.” It was not like you could just go for a swim.


After a few weeks, as unusual entries started to fill my journal, I tried to understand their genesis. Was it the glaring sunlight ricocheting off the stark white landscape? Perhaps it was the lack of any darkness, since we were in perpetual daylight? Or were my thoughts quasi-hallucinogenic due to the unsettled sleep that accompanies nights without nightfall?
But eventually I realized that it was not just the strangeness of the light/dark paradigm that was jostling my worldview. Instead, it was the grip of the Primal. Our issues were not whether our smart phones were fully charged or who won the NBA finals or did Kim have more plastic surgery. Up there in the High latitudes, everything was so basic and primitive and raw.
Fall overboard, and the Sea would freeze you. Make a wrong decision, and the Ice would crush you. Go ashore without the rifle, and the Snow Bear would eat you. In such circumstances it was natural to discard the superficial and focus on the truly elemental aspects of the Human Condition. Here are some of my observations.
*******

Striving to understand Life requires considerable Unlearning. My college degree is in Political Science, so I should have at least a basic understanding of how politics shapes our world. But almost everything that I learned in the classroom was either a misdirection or an outright lie. So I have dedicated the last several years to self-study - using the Internet to travel where no textbook will ever lead you. Here is a small sample of those hard-won lessons.
Lee Harvey Oswald did not act alone. And the echo of those gunshots is still heard today in the Halls of Power.
Those atomic bombs did not have to fall from the sky and melt mothers and fathers and sisters and brothers into human puddles. The Japanese were already trying to surrender.
Twentieth Century Socialism did not lead to a Workers’ Utopia. It heaped up a Eurasian death pyre at least 50 million high.
None of my professors told me that bankers underwrite both sides in almost every war just as they do in almost every election. Nor did they emphasize how obscene the profits are for these money movers.
And certainly we never examined whether Democracy had been captured by the Oligarchy. From its birth as a genuine attempt at empowering ordinary people, it had been transformed into a system that clandestinely allows The Malignant Overlords to rule and pillage the everyday person.
Nor was secrecy ever mentioned in the lecture hall. How could it be – since it was a secret? Nobody ever whispered about the Cecil Rhodes Round Table Group or the Council on Foreign Relations or the Bilderbergers, who were already behind the curtain pulling the geopolitical strings, during my college years.
I could cite many other examples of incredibly vital topics that were never presented to me in those Political Science classes. Subjects like the Deep State, the echo chamber media, false flags, and the CIA’s violent interference around the world, were never discussed.

So how is a normal person supposed to understand and respond to the world, when the people in charge are deliberately deceiving everyone? When political gatekeepers can so effectively shape our perceptions of reality in order to further their insatiable desire for more power and money, how can we possibly sculpt a brighter future for our loved ones?
I believe that the answer is Uncoupling. I have just tried to persuade you that Unlearning is vital if you hope to break free from the web of indoctrination that has been spun around you. That brainwashing has been immense and intense, but you can escape it through the other web – the World Wide Web.
When I speak of Uncoupling, this is my vision. I believe that the System is so profoundly corrupt that it cannot be repaired. Therefore, your best chance at a joyous and meaningful Life is to disengage from the so-called Real World as much as possible. Abandon the main stream and quietly slide off into a little tributary.
You don’t have to use an approach as radical as mine – sailing away from the whole damned mess in a self-sufficient sailboat. But you do need to disconnect as much as possible from an increasingly hollow and vulgar society.
When you perceive the education system as an indoctrination matrix, then remove your children and home-school them. When the dangers of Frankenfoods alarm you, buy your groceries from local farmers’ markets. When you want to push back against the Microsoft Monolith choose open-source options like Libre Office. If you want to expose your children to other cultures get online and find a caretaker opportunity in some exotic locale. Ditch your mega-bank servitude and join a community credit union.
These are just a few examples of liberating decisions that you can make. And if you stay mindful, you will recognize that almost every facet of your daily experience can be altered significantly and positively. Categories like transportation, communication and entertainment can all be uncoupled from the usual status quo template.
*******

In summary, my advice is to view this historical moment in this way. There is no cavalry, camped just over the hill, that will come and save you. Instead, you must to be your own cavalry. But don’t do it with trumpets blaring and banners waving. Just quietly slip away from the noxious, bellowing maelstrom that is the modern world – and do so with a smile on your face!
Posted by Ray Jason at 11:59 AM