A SEA GYPSY HOWLS AT THE MOON 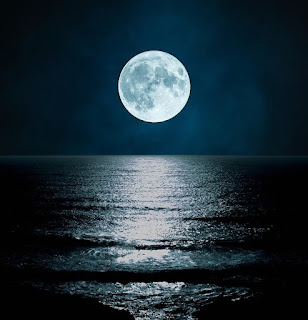 Sometimes I just have to sail off by myself and howl at the moon. I anchor in a secluded spot totally removed from human society. Mountains in the background, islands in the foreground and healing water beneath me.

There my only companions live in the sea and the sky. My little sea-going monastery, with its solitude and simplicity, provides me an almost piercing perspective. Every morning I attend sunrise services in the Church of the Natural - saddened by the awareness that most of humanity is hypnotized in the Cult of the Artificial.

For a decade I have been shouting out into cyberspace, warning that demons have high-jacked the Human Voyage. For decades they did this secretly, but now they boldly proclaim their intentions from their Dark Tower of Davos.

They brazenly declare that Man must be transformed – trans-humaned if you will. They insist that a species refined through millions of years, must be terminated and replaced with a Humanity 2.0. According to the Davosonians, who I prefer to scorn as our Malignant Overlords, the natural, gradually-evolved, carbon-based human, must be replaced by an artificial and hastily conceived, silica-based humanoid.

I recognize that our rulers dismiss Nature as a useless relic from the 19th century. They ridicule it as being totally irrelevant in our high-tech, digital, cyber-world. But, more importantly, I suddenly understand that they fear Nature. That is because they cannot completely control it.

And they are terrified of people who embrace Nature - because they are far more difficult to enslave.

It infuriates them that I can live a happy and healthy life by catching fish from the sea and drinking water from the sky. I am not dependent on the Malignant Overlords. So they cannot command me. This angers them immensely. How lovely!

Replacing the natural with the artificial is vitally important to the M.O.s. That’s because by doing so, they are elevating The Fake over The Real. In order to achieve total control of the planetary population and resources, they must achieve worldwide deception. And they must do so as masterfully as an evil wizard.

They will convince you that eating BillGatesGoo is better for you than free-range chicken. They will entice you into putting on Virtual Reality goggles and visiting the pyramids, while they don’t allow you to actually travel to Egypt.

They will persuade you that by accepting a Universal Basic Income you will not become dependent on Big Brother, but will actually be liberating yourself. They will lure you into a cashless society with digital money that they assure you is for your convenience and not for your subjugation.

They will absurdly claim that censorship is the key to protecting freedom of speech. They will attack your grasp on reality with movies and video games in which the super heroes have idiotically impossible powers.

They will force you off the land and into the mega-cities to live in tiny pods where the almighty surveillance state can follow your every move. They will reserve the beautiful and majestic natural world for themselves. Everything outside of the dystopian urban squalor zones will become a Club Med for the rich – a Club Earth.

They will viciously attack carbon dioxide even though they realize that it is vital to plant life which is essential to ALL LIFE. And they will do this while knowing that CO2 is only a tiny proportion of Earth’s atmospheric make-up, and therefore cannot profoundly influence the climate.

They will lure your children into Drag Queen Story Hour and force them to sit on the erect laps of fat, bearded, “female” perverts. While there, someone will probably try to convince you that men can have babies.

From these examples – and there are many more – it is clear that we are facing a gigantic, multi-vector assault on reality. This is being done in order to disorient and confuse and demoralize us. This will lead to physical, emotional and psychological exhaustion. Many will surrender. At which point they will submit to their enslavement and become cogs in the machine or bees for the hive or nodes in the borg.

The sun descends behind the mountains leaving a pastel memento of pink, lavender and saffron. Sitting on deck with my back against AVENTURA’s mast, I wonder whether the world can reverse its descent into tyranny and de-humanization. The forces arrayed against the mostly kind and decent Common Man are so powerful and seemingly so insurmountable.

But I recall that in my birth century there were other brutal, totalitarian regimes that seemed invincible. Yet they were all defeated. And their dark, putrid malignancy no longer prowls the Earth.

It's always nice to hear from you. My email address is: