GOING FOR THE GUIDESTONES 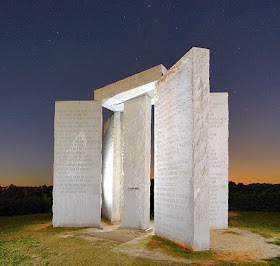 The realization hit me like a bolt of mental lightning. The bastards are GOING FOR THE GUIDESTONES! They are betting that their long campaign to dumb down the global population combined with their evil-eye surveillance grid, will now allow them to stomp Humanity into total submission.

These soulless predators, who I scornfully and gleefully, describe as our Malignant Overlords, are not particularly motivated by greed. They all have more than enough money. What they truly desire is POWER – the sickest variety – the type that allows them to utterly control the lives of ordinary people.

Yet, even that is not enough to satisfy the desires of the most wicked of them. They find the common people so loathsome, that they would prefer to eliminate the vast majority of them. Their scheme is to transform the planet into a 21st century Techno-Feudalism - but with an enormously reduced population.

A tiny core of self-proclaimed Elites would rule. Beneath them, the Technicians would run the computers, the robots and the Artificial Intelligence. The next level down would be the Enforcers. The Police and the Military who would provide security for The Despised at the top.

At the very bottom would be the Neo-slaves of the global Cyber-plantation. They would struggle to exist at even a subsistence level. They would be forced to do the undesirable work that even the robots would refuse to perform. Their income would barely support them; and their pastimes and pleasures would be dictated by the World Government via their mandatory, personal screens.

These devices would also monitor everything about them - their movements, bank accounts, vaccine compliance, health status, etc. These “miracle devices” could even discover any dangerous anti-government proclivities.

With this control grid in place, the oppressors could convert the entire planet into one gigantic Club Med - or should that be Club Mad – for themselves. They would no longer have to share the ski slopes at Aspen with the little people. The French Riviera would be cleansed of the riff-raff. Only the powerful would travel by air or enjoy sea cruises. That is the true intention of the U.N.'s Agenda 21/2030. It would convert Earth into a resort for the rich - and a gulag for the rest.

When that flash of recognition jolted me, I suddenly realized that after many decades of careful preparation, the Malignant Overlord’s had finished setting the trap. Now, they were about to spring it. Their Georgia Guidestones moment had arrived.

For those of you who are unfamiliar with this strange monument that stands 16 feet tall, sneering down at the lesser people, that is to be expected. After all, every single day you are being simmered in a toxic sludge of industrial grade propaganda. Your controllers want you misinformed, confused, terrified and incapable of resistance.

BTW, these so-called Guidestones are the perfect rebuttal to the claim that “there are no secret cabals of powerful men conspiring for world domination.” These gigantic granite slabs were designed and financed by an “anonymous person, who represented a clandestine group that never revealed itself.” And it has now been over 40 years since those mysterious modern Ten Commandments were placed in a north Georgia pasture.

The very first edict, which is carved into the granite - in EIGHT different languages - states “Maintain Humanity under 500 million in perpetual balance with Nature.” The “in perpetual balance with Nature” phrase seems admirable. However, the 500 million number sickens me. I suspect that the other 7.5 billion humans, who would have to be eliminated, are also appalled by this directive.

A normal person might interject at this point that nobody is so evil that they wish to kill the vast majority of the people on Earth. But you believe that because you possess “decency bias.” You are blessed with compassion, empathy and the tendency to “live and let live.” You don’t wish to rule anyone’s life, and you certainly don’t wish to rule everyone’s life.

But tragically, there is a subset of homo sapiens that doesn’t just desire control over others, they crave it! And what makes this addiction even more horrific is their ability to delude themselves with the lie that their control freak sickness is actually for “the Greater Good.”

They are so convinced of their personal superiority and the nobility of their cause, that they feel no guilt in subjecting people to gruesome, joy-trampling domination. Don’t forget, we are only a couple of decades removed from a century that witnessed the deaths of hundreds of millions of people at the hands of their cold-blooded leaders.

What initially triggered my Guidestones revelation, was my careful examination of the way that the political and medical establishment had responded to the Wuhan Virus. When you examine the actions that these “deciders” have imposed, they make no sense if they are actually fighting a battle for health. BUT, if their hidden agenda – their TRUE goal – is to fulfill the depopulation directive of the Georgia Guidestones, then their policies make complete sense.

Here are some examples that demonstrate this:

Lockdowns For many centuries the best way of dealing with a virulent disease, was to isolate the sick people away from those who are healthy. This allowed the infected to receive specific treatment, while permitting the un-afflicted to develop antibodies and herd immunity.

If this method has worked for centuries, why was the protocol reversed for the Wuhan Virus? It makes no sense – unless your true purpose is to sicken and not to heal.

Masks The absurdity of these cheap blue masks as a disease inhibitor is mind-boggling. It actually states on the box that they come in, that they are not suitable for stopping the spread of viruses. The masks are so porous that a great descriptive meme was created back in early 2020 to describe the lunacy of their usage. It joked that these masks were about as reliable as “stopping a mosquito with a chain link fence.”

But even though there is no upside to these embarrassing face diapers, there is plenty of downside. And I am not referring to their symbolic value as badges of obedience to “the Science the State.” I am referencing the fact that they dramatically block the flow of oxygen to all of the vital organs in our bodies. AND they force us to repeatedly breathe in particles that our systems are trying to expel through our exhalations. So, masks make no medical sense, unless you are trying to weaken and destroy massive amounts of people.

The Non-Vaxx Vaxx Why the unceasing demands that everyone be vaccinated? After all, the survival rate for this supposed pandemic is around 99%. And there are cheap alternative therapies such as HCQ and Ivermectin that are very effective.

And the vaccine itself is not even a vaxx – it is some experimental gene altering concoction (I won’t grace it with the word “therapy.”). Furthermore, it only received “emergency approval” by by-passing the usual rigorous testing required of new vaccines. Maybe that was because in the few animal tests that they did on gerbils and rats, all of the animals DIED!!

A clear thinker would conclude that a disease that is no more severe than the common flu and that can be treated effectively with safe, inexpensive drugs, surely does not require a mandatory global campaign of mass vaccination. That same unbiased thinker would have to examine the DARK possibility that the vaxx is not a cure jab … but a KILL JAB.

As I conclude this essay, I am deeply saddened by how easily the vast majority of Humanity fell for this massive Covid scam. Even though several hundred of us have been on the World-Wide Watchtowers sounding the alarm, it feels like we have just been barking at the dark side of the moon. It appears that the dream of the Malignant Overlords for planetary control, that they carved onto those granite slabs, will soon be fulfilled.

But then I think of other gigantic monuments erected by prior megalomaniacs, who also had dreams of omnipotent control. I recall the Pharaohs and their pyramids and the Caesars and their Colosseum.

Slowly, a smile brightens my un-masked face. For I suddenly realize that those enormous structures are now only … RUINS. They are windswept monuments to the failure of those who seek to dominate! And one day … the Guidestones will also crumble.